Vision:  Transforming our city together through service.

Since 2013 CityServe has partnered with Churches, Councils and Businesses to mobilise volunteers to benefit the community. CityServe assists people regardless of their faith background, commitment, or other social standing or identity.

Over the last 7 years hundreds of projects and thousands of volunteers have cleaned, painted and gardened community facilities including child care centres, community halls, sporting facilities, and the homes of the needy. In most cases projects are single day projects completed on weekends throughout the month of October.  Projects have taken place in Newcastle, Lake Macquarie, Maitland, Shellharbour, Woollongong and Port Macquarie.

As an organisation CityServe has achieved these outcomes through partnership, volunteers and inkind resources. CityServe has had no paid staff, venue or currency other than goodwill.

CityServe is an Incorporated Association with charity status and as such operates under the rules and guidelines of the Australian Charities and Not for Profit Association.  There is a Board and Constitution that guide its operations.

In 2020 in response to COVID-19 CityServe launched Hello Hunter. Hello Hunter partners with churches to mobilise volunteers to help people in need, regardless of their faith background, commitment, or other social standing or dientity. Hello Hunter is for any person experiencing hardship due to social isolation, poverty, disease, disaster, disability, illness, age, mental health, family, social, or other community network breakdown. 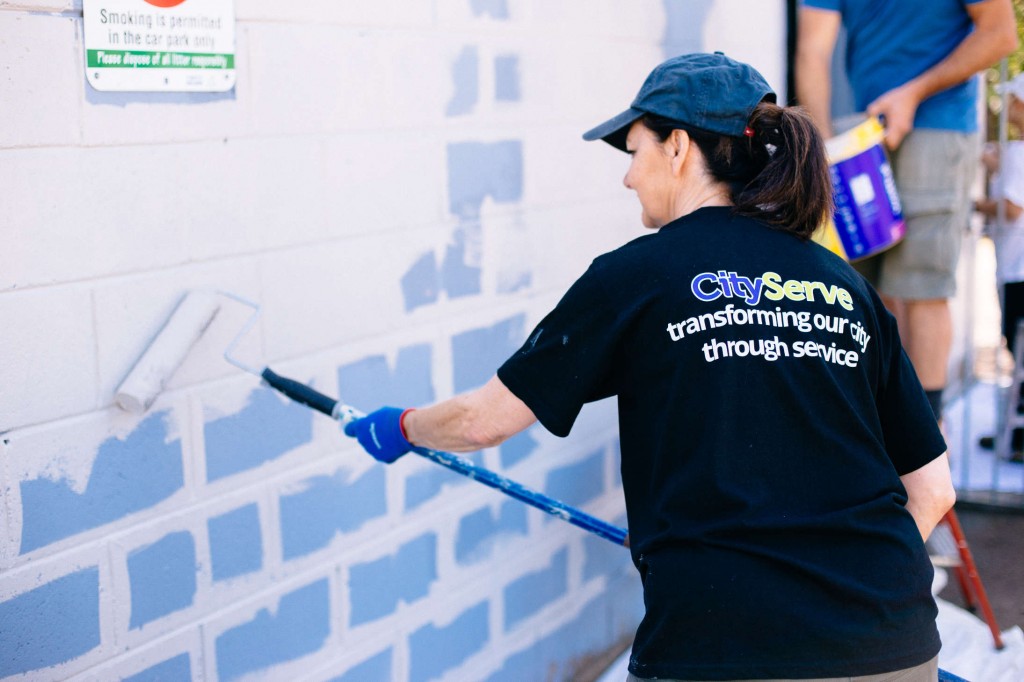 CityServe Australia was initiated in the Hunter Region where there has always been a great serving tradition. People give of their time, energy and resources to serve others, particularly those doing it tough.

CityServe builds on this great tradition!

In 2011 a group of Newcastle Pastors began a partnership with the Luis Palau association to host an outreach festival in Newcastle. In November 2012 a 2 day festival was held in the heart of the City, tens of thousands of people attended. Prior to the festival the Palau Association proposed that the churches pick up on the concept of a “Season of Service”.Through Compassion’s programs, children are supported through every stage of life, and are equipped to bring lasting change to their families and communities.

In 2012 the ‘Season of Service’ concept was adapted for Newcastle to a ‘One Day’ project with the hope that by limiting projects to one day or weekend it might make it an achievable goal for churches. The intention was that this would become an annual focus that connected the church to the community. In 2012 more than 1000 volunteers serving across the Hunter completed 100 + community projects; school playgrounds and facilities were transformed, derelict city buildings painted, streets and parks cleaned and homes or gardens of the needy given a makeover. 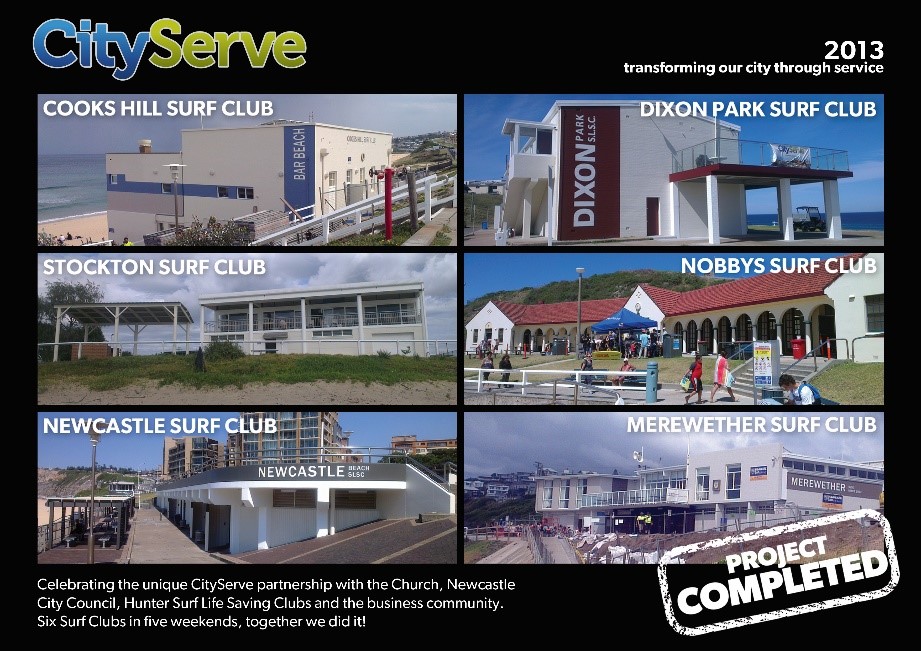 In 2013 City Serve was again embraced by the churches of the region. Lake Macquarie City Council with the support of their Mayor Cr Jodie Harrison and LMCC project manager Brad Smith joined the CityServe initiative. In the Newcastle a unique partnership emerged between the Church, Newcastle City Council, Hunter Surf Life Saving and the business community. This partnership arose when 5 City Church pastors asked the Lord Mayor how they could assist the city and the ‘surf club renewal projects’ were established. The goal was to paint, clean and restore 6 Hunter Surf Clubs over 5 weekends. During the project 800 people volunteered contributing around 5000 work hrs. The estimated total value was over $550 000. 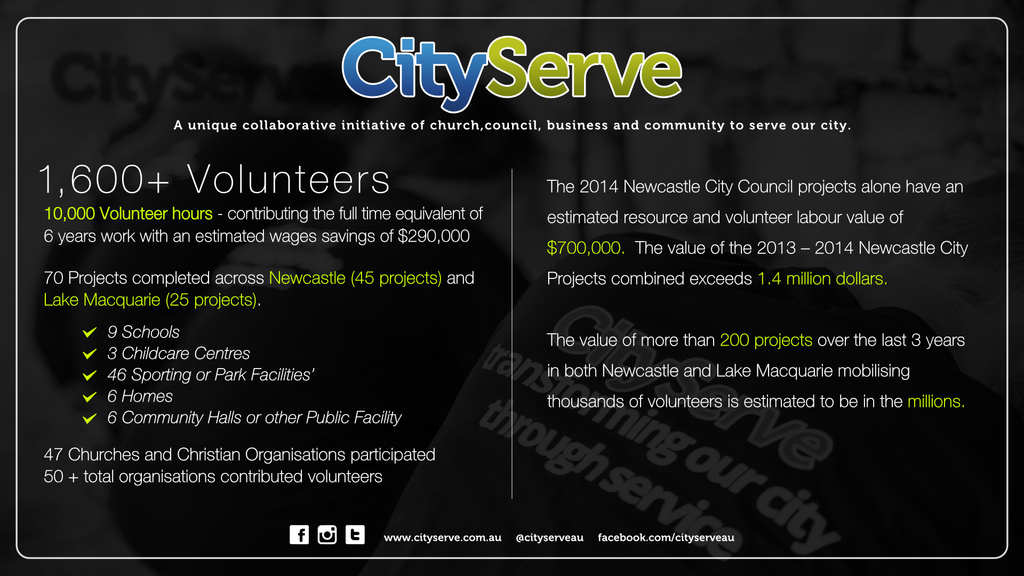 In 2014 the church continued to reach out and expand its service in the community. Director Infrastructure NCC Frank Cordingley described CityServe as “a fantastic example of people caring about their communities and being willing to roll up their sleeves and pitch in for positive change.” He described his experience of the CityServe volunteer program as being, “one of the best that he has observed throughout his career in council.”CityServe Evaluation Report 2014 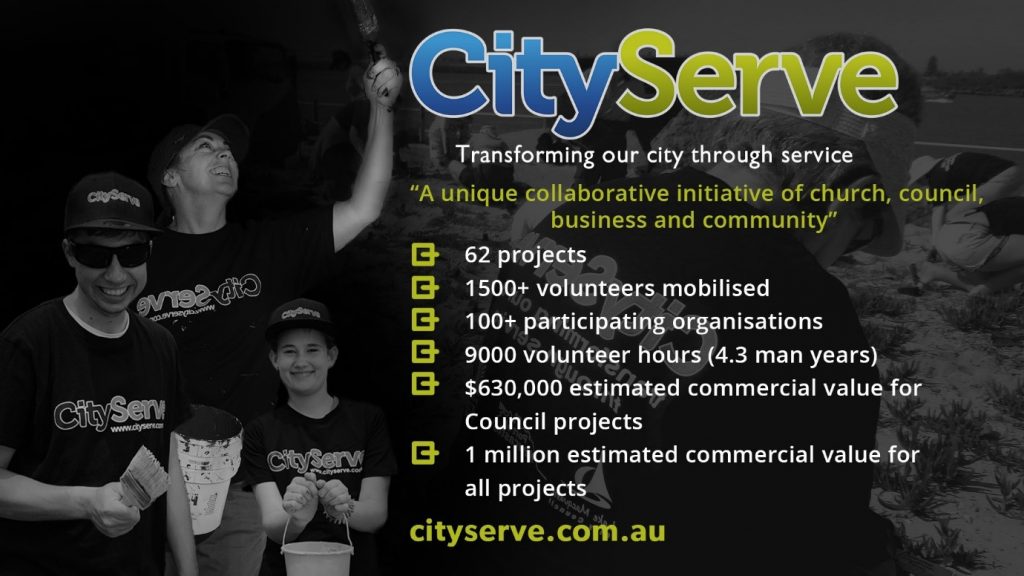 In 2014 CityServe was established in Shellharbour. A group of pastors heard about the Newcastle initiative and approached Rick Prosser to establish the program in their local area. The ‘Little Park’ Project was successfully completed; 150 plus volunteers contribute 750 hours of move tonnes of topsoil, soft fall and mulch throughout the park. Gardens were tidied, and fences, handrails and gates repainted. The volunteers partnered with Shellharbour local council and a sense of community and unity established.

In 2015 CityServe completed 60 plus projects mobilising 1500+ volunteers. There were 100+ participating organisations and 9000 volunteer hours were mobilized. It has been estimated that the commercial value of council projects alone was $630 000.

In Jan 2016 CityServe was awarded the ‘Australia Day Community Organisation of the Year Award’ by Newcastle City Council. 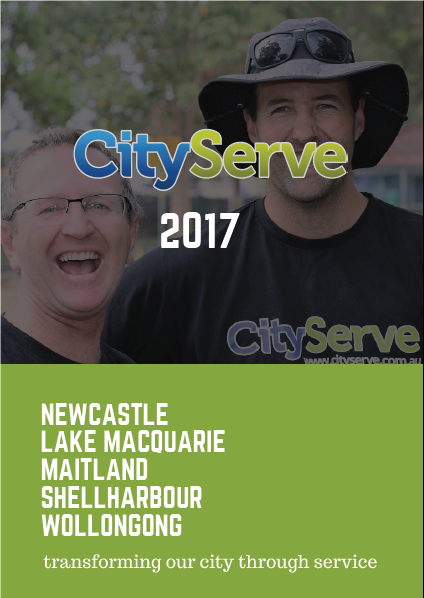